In June, when I was browsing the news online, I came across a protest sign held by a senior woman in America - "I can't believe we're still protesting this shit."

She referred to the Black Lives Matter movement that is sweeping North America right now. I estimated her age and figured she must have experienced the Civil Rights Movement during her youth. A half-century later, George Floyd, a black man, was killed cruelly by a Minneapolis policeman in public.

Despite coming from a different race, a different country, and at a different age, I shared some of her feelings when I read her sign. In my middle school years, news, textbooks, and people around all promoted some progressive ideas that girls and boys are equal; countries should cooperate, and globalization will help us to prosper. However, only two decades later, in China, society is pushing women back into the home, professors discriminated against female students publicly, and the female employment rate in China has been declining for years. Also, populism is sweeping the globe. 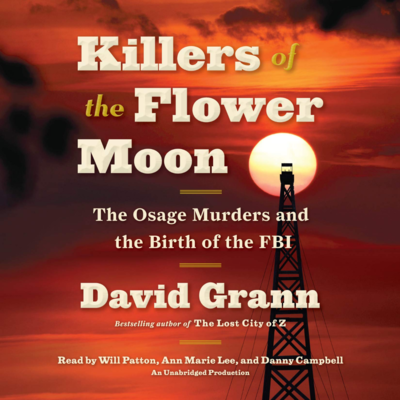 Killers of the Flower Moon

The main topic of "Killers of the Flower Moon" is also discrimination: systemic discrimination against the native American Indians that occurred only one century ago.

When discussing how colonists from Europe seized land from the native American Indians, I had always assumed that these stories took place in the century after Columbus “discovered” the North American continent. I've never thought that such oppression continued to happen in the past century.

The book consists of three parts.

The first part began with a series of strange deaths and disappearances in the Indian Osage tribe. An Osage woman named Mollie, found her sister Anna missing. She asked her husband Ernest, a white man from Texas, to help her to find Anna. The last person who was seen accompanied by Anna was Bryan, Ernest's brother. Later, Anna was found killed.

Anna's death is not the first mysterious death in the Osage tribe.

The native region of the Osage tribe was in Ohio and Mississippi, and their living space / land was continuously squeezed after the European colonists came to this continent. After centuries of eviction, the United States government started to practice some milder solutions on the native Indians at the beginning of the 20th century -- forced allotment.

At that time, the Osage tribe had 2228 registered members, who could receive 657 acres per capita in Oklahoma under an agreement with the government. The tribe leaders insisted in negotiations on retaining mineral rights, which brought a steady income as well as a dark fate to the Osage tribe.

The oil companies flocked to the land owned by the Osage tribe after oil was discovered. Each Osage member who owned headright /a title didn't need to do anything to receive cheques of large amounts. In the peak period, the year 1925, an Osage member could receive 13k USD annually, roughly 150k USD in current purchasing power. However, the government thought that these Osage people were not competent and mature enough to manage their wealth. The government decided to take some responsibility, so the Congress passed a law in 1921. The government assigned guardians to the Osage people to help manage their wealth.

At first, the guardians forcibly sold cheap household goods to the Osage at high prices; then, they married the Osage to share the money; and finally, they began to kill their spouses and children to inherit the headrights.

The families of the victims and the tribal chiefs sensed something unusual/suspicious, so they hired private detectives and lawyers to investigate. Horribly, these people were also killed. Within a few years, dozens of Osage members died without explanations. With the local police at their wits' end, the tribal leader turned to the newly formed FBI which at that time was called the Bureau of Investigation.

The second part is the rise of J. Edgar Hoover, the director of the Bureau of Investigation, which was very limited in size, power, and influence. Hoover sent agent Tom White to Oklahoma to investigate this mysterious series of murders.

Hoover was in charge of FBI for nearly half century from that time. The presidents come and go, but Hoover remains.

Realizing the circumstance's complexity, Tom White decided to be the public face while sending other agents to investigate undercover. It didn't take long to find the culprits - local celebrity William King Hale, and his two nephews, Ernest and Bryan Burkhart.

Ernest Burkhart married Mollie. He and his brother Bryan together killed Mollie's sister, mother, and cousins. Ernest also tried to poison Mollie. However, Mollie sensed the danger from her husband. She quickly divorced Ernest and survived the conspiracy.

Tom White finally brought some murders to trial. William Hale and Ernst were sentenced, but Bryan, who killed Anna at the beginning of this story, didn't receive any punishment for turning states’ evidence. The Osage murders shocked the American society, and Hoover realized that the case was an opportunity for the Bureau to seize more reputation and power. He used this homicide investigation as a marketing tool for his infant bureau, and successfully gained significant attention.

The third and the final part is the continuing investigation by David Grann, an American journalist and the author of this book. Not all the cases are unraveled, and the survivors and their descendants are still struggling to uncover the truth. Due to a lack of records, it's difficult for them to find the truth. Thus, they suspected every relative or friend who once played the role of "guardian." Some of them were guilty, while others may be completely innocent; however, nobody could prove it.

When I read the brief that dozens of people in the Osage tribe were killed, I thought that was a horrible historical event. When I read that Mollie's granddaughter recalled, "my dad had to live knowing that his father had tried to kill him," the suffocating horror almost overwhelmed me. I immediately understood what kind of shadows these victims had lived under all their lives - my father tried to kill my mother and me out of greed, and what if I'm the bad seed?